So much has happened this summer, and I have been kind of lazy putting things down in type.  So let's rectify this situation.  After the branding we did at our place, we made a mad dash to Calgary that early Sunday morning to see my sister in the hospital, and left that same night - and I thank God I did - two hours I got home she peacefully went in her sleep.  That was a milestone that hit really hard for our family, but as time goes on it gets better.  Our final good byes were to be done a week later, which happened to be during the first Continental Stockdog Championship in Winnipeg, and scrambling was done to find competitors to fill my dog's spots.  We did drive throughout the night to get to Winnipeg to compete in the cattle dog portion - in which Gin did really well, getting into the finals and finishing 4th.  I would like to think my sister Jean was cheering me on.  The following day was full of hugs and tears, and for two weeks later we all had the worst colds imaginable.
July was soon upon us, and with July was the Wildrose Trial at Bowden followed with the Calgary Stampede.  The dogs did not do that spectacular, but the pups I had with me shone - they shone so much that they took a permanent trip down to the States!  Bright gaffers that they are.  The Stampede is always a fun time, and it was fun times tenfold this year.  I won one round with Gin, thus getting enough points to go to Virginia this year.
With the flood this year, we could not be in the Saddledome, but a big tent was to be our home.  There was no jumbotron, but we had a mini-jumbotron to watch. 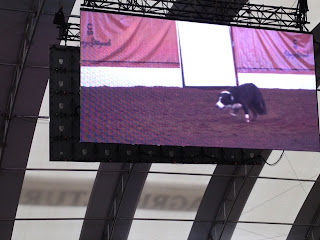 Chris gave me ulcers as he gave his dogs wrong flanks, and then got after them after they only did what they told.  Hmmm, nerves perhaps? 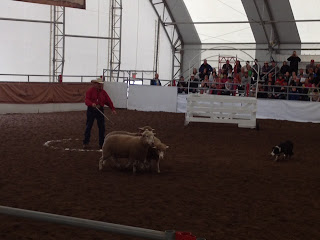 Our dogs hammed it up with the crowds. 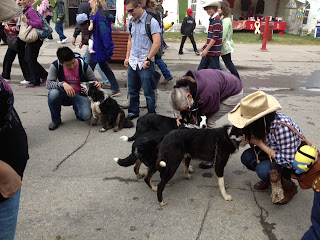 The bridge over to the other side was unfortunately down river...likely in High River. 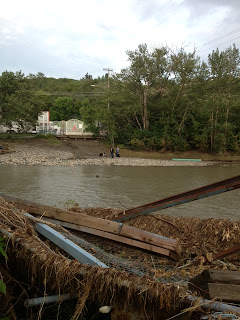 Floss found this hard hat...likely belonged to the worker that was on the bridge at the time it was washed away. 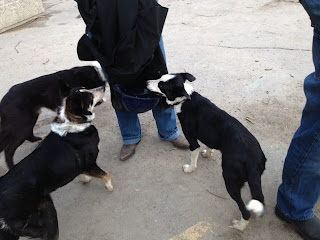 I did not get into the finals with Gin, but did get to squeak in with Floss, finishing middle of the pack.  In the end, Kaelene Forsyth and Gypsy Rose were the big kahunas! 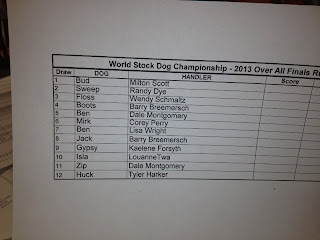 The icing on the cake was being the recipient of the Sponsor's Choice Award....that being a new trailer! It is given to a handler which shows, among things, love of the sport, good sportsmanship, and an all round good ambassador of the dog sport.  That person could not be there, so I got it instead. Thank God Stormy Winters couldn't make it out to Stampede this year. 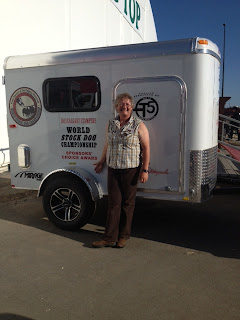 Heck, I may put a bed in there, and call it my home away from home - it seems that I am away from home a lot.
Posted by Wendy at 8:54 PM No comments: