Our New Postal Code Is...

...not to be revealed quite yet - I don't want to jinx it. Chris and I went down to Maple Creek yesterday to meet with the sellers and the realtor. A deal has been made, so it is just contingent on a few things (anybody have pasture for 250 cows available??) It was a good afternoon, and we ended the day at a restaurant to celebrate the days' events. This is where we got to have the delicacy "Horse's Nuts" for dessert. Now, this must be just a Maple Creek thing, definitely not a Saskatchewan thing. I would have remembered this growing up. The nuts were just fine, creamy and tasty. Now I will have to find a watermelon to fit on top of Chris's big German head so that we can be true Saskatchewanites to show Roughrider pride - which is a requirement for the land deal.
I was going to stay up for the Royal Wedding this morning - but after arriving back at 12:30 am, I thought I better have a lie in. I lied in until 6 am and then saw the highlights - the wedding dress (no where near what William's mom had worn), the marriage vows (William Arthur Philip Louis -dear Katey didn't muck up this long handle) and the balcony kiss(es). Yes, I am a monarchist - might be because my great-great aunt was a lace maker for a royal wedding wedding dress back in the day (the lace bun is sitting in the Broadview Museum), and a great aunt served tea to the queen. When Prince Charles was in Calgary - I saw him up close when he walked through the barns during 4-H on parade. Maybe I will pay them a visit when I go to England this year. Wonder if I can have tea - I like mine with a little milk.
Posted by Wendy at 10:12 AM 12 comments:

Spring has sprung!! I have been working up in Wetaskiwin for the last week, and finally there seems to be an end to all of this snow. Also, with the coming of spring, is also the coming of many babies. The calves are coming along nicely, the lambs are bounding behind them, and then there are the countless number of pups I have been delivering at the clinic. It started with the delivery of 2 bouncing baby Bull Mastiffs (they weighed about 1 pound each), and about 12 hours later, the squeals of 4 Chihuahuas were born (weighing about 5 oz each). Five Labrador Retrievers came into the world the other day as well - they were all black. Heaven knows how one can tell them apart. The bulldog puppies - I have lost count on these guys. I do remember the one born on April 19th - they called it Wendy after me. Wendy the bulldog, a grand bitch I imagine it will be. I think it would be easier on these guys if I could put a zipper in so that it is easier for all involved - especially the mothers involved. I am awaiting a call from an English Sheepdog breeder - who knows, maybe it will be an unassisted birth. I do believe that is how mother nature intended it to be in any case.
The progesterone is flowing around here - pinpointing the exact moment when either AI or surgical implants are to be done. I might miss these ones being born, they will be likely in early July - and I hope I am on some good trial field with my dogs. In two weeks will be the trip down to the Bluegrass - so far, not much training has been done on my part. Louanne is going to pop down on the 30th to do a little practice - with the dogs as well as with some cider due to an upcoming 29th birthday of Louanne's. Darn this training stuff is hard on a person's liver.
Posted by Wendy at 2:50 PM 2 comments:

The Secret To Good Gravy

So last weekend, when I arrived, supper was cooking. Sharon (my sister) cooked up a turkey that could be in the front of any recipe magazine.
The pope's nose was cooked just right. Not sure which pope had the nose that looked like a turkey's tail, but nonetheless, that is what it is called. 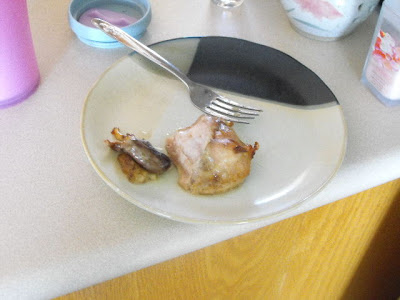 The gravy is a work of art - never does it taste the same twice in a row. However, in this trip, I found out the secret to my sister's gravy. 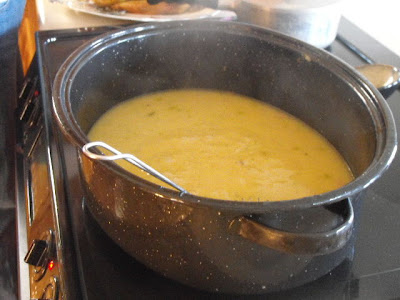 Yes, OXO it is. There was also a pail for beef flavoring as well in her pantry. 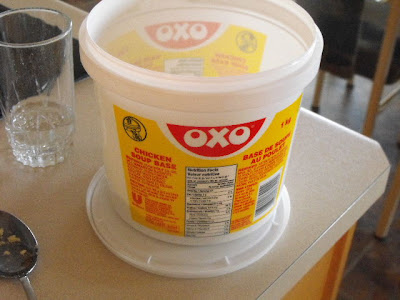 Sorry Sharon, the gig is up. Now if we can only figure out the Caramilk secret.
Posted by Wendy at 5:55 PM No comments:

...gas...stations this week, and I can't believe the jump in price. Will possibly have to rob banks to pay for fuel fill ups for the dog trial season. I was totally ill this morning when I saw, yet again, a covering of white stuff on the ground, most of it flying sideways. Spring will be a very short season this year, or summer will be, depending if it ever gets above 20 C. Found out I passed the Saskatchewan Veterinary Medical Association exam this week. The passing grade was 70, and I got 92 (whew, guess I spelled my name right this time). So now, it is just nailing our family name on a new place - in which we still don't have. Right now, the cows are calving, and also the ewes are popping lambs, so it is hard to get away and look anywhere. Lisa Wright showed me a great place next to her place near Athabasca, who knows, maybe the test in Saskatchewan will all be for nothing. The only question is - could I stand Lisa as a neighbor? Or better yet said, could she stand us as neighbors? In any road, our spirits are still fairly good relating to the purchasing/moving aspect- it is probably due to the spirits we drink that keep our spirits high.
Posted by Wendy at 3:20 PM 2 comments:

Well, this weekend was the trek back to Saskatoon to write my SVMA exam so I can practice in Saskatchewan. First of all, I stopped in Regina to have a visit with my sister Sharon and her family (pictures will be soon) and my older sister Sandy and her other (ugly) half Ken (actually he looks like the curler Kevin Martin....I feel sorry for Kevin Martin that he looks like my brother-in-law). (Hey Ken, I won this end!) The World Curling Championships were on in Regina, and Sandy and Kevin Look-A-Like went to support the Canadian team. Not being a curling connoisseur, I learned about the hammer, rocks, ends and the hack (no, it is not if a hammer is used on the family jewels, it ends with a hacking cough - but close). In the end, Canada ruled the sport, and it was told that the spectator base for these top notch curlers were the best that the countries had ever seen. From the Norwegians crazy pants to the Americans signing women chests, I guess the week was a success. Sunday I left Regina to get to Saskatoon to complete the seminar and test I was to do. As I left, my sister Sharon reminded me not to speed on the way there. I was doing great, until I realized I was on the wrong highway and had gone 1/2 hour the wrong way. Obviously the 8 years of travelling that highway in my past did not stick very well. All went well, 140 km/hour got me there 1/2 an hour ahead of schedule. I found the old seat I used in old room 2115, and it was like I never left college...however, I was one of the oldest in the room of 20 somethings. I could feel myself nodding off....just like old times. We did our seminar, and then we started our 1/2 hour exam. Eight minutes later I was done, then I checked either side of the pages of the test, made sure I had enough pages, and then waited until everyone else finished. I have a fair feeling that I was successful today. On the way back, I went more the speed limit, and stayed on the correct road. I made certain that I did not pass the RCMP that was ahead of me (who was going about 125km/hour). I found out from good authority that Aggie Days went well, Corey Perry and Ben won it (and his Jill came in third), Bob Stephens and Brian Reed also finished well. Chris Jobe I was told didn't study very well, and failed to complete the course. Chris, anytime you want to be a study partner, call me up. I am all practiced up.
Posted by Wendy at 9:08 PM No comments:

Getting In A Little Training -And I Do Mean Little

A week ago, Jill Brodie stopped by for a visit, and we got in some training. She brought out her young dogs, and I took some action shots. 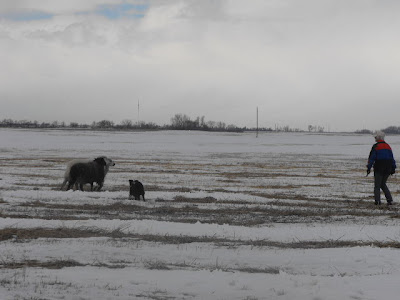 I then gave the camera to Jill and asked her to take a shot of me working my dogs.
This is what she got. 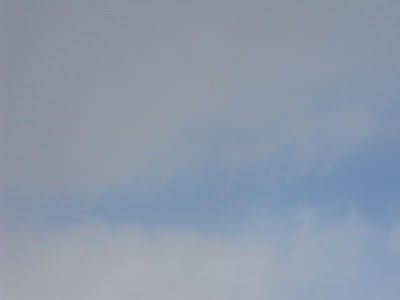 Finally she got one of me and Floss - working on the drive for the big trip in Bluegrass. 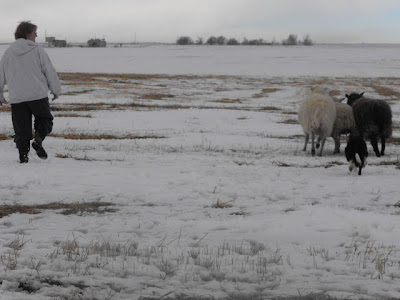 Then I found this little button on my camera to take continuous shots, and took my own shots of Floss. 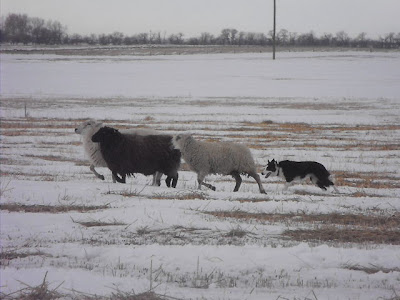 I think I am going to like this function on this camera. 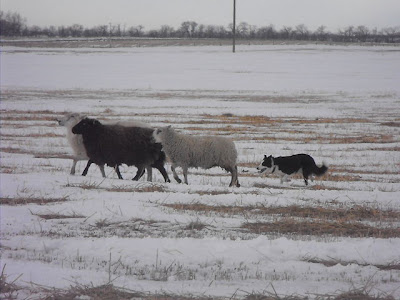 I may train a little tomorrow before going off to big Saskabush for my exam. The weekends are slipping by quickly - soon it will be the instinct herd testing, followed by the Calvin Jones clinics. Then it will be the Bluegrass - yikes. I have convinced myself it will be a great holiday. Not working Gin much at all with her pups, so we will see how that works out. Floss may turn out alright, but certainly won't hold my breath. Had an invite to help with some demos at the festival they have at the Bluegrass, that may turn out to be the only sheep they see prior to their runs. Look for my book - "Training At The Trial Field" - bound to be a bestseller.
Posted by Wendy at 8:20 PM No comments:

Being April Fools day, I can't pass up the opportunity to play a trick. I came to work early this morning to set my plan in motion. When Shauna the tech got in, I asked her to check the parvo dog in isolation for me - had to make sure the intravenous fluids were still running- and I told her how "lucky" I was to have one of these come in on my weekend to work. Shauna donned her gloves to check on Micky Gerbell. She tried to pass it on to the weekend tech, but they could not be convinced to go. A blood curdling scream was heard when she opened the door to isolation - I had placed a gerbil from the pet store we take care of. Priceless. She was not the only person to get it as well, I quickly put the gerbil in the cat room with a blanket over top - Erin, the tech that was looking after kennels, was asked to bring the nervous cat that was in the room. She put on the big leather gloves and slowly opened the kennel door, only to see Micky running in his wheel. Luckily I was in surgery today, so I was safe from any retaliation. For the moment that is. If you can't have fun at work, where can you have fun?
Posted by Wendy at 11:24 AM No comments: