It's been a couple of weeks now, but I have finally got my Finals trip out of my system. But for old time's sake, I thought I would have a little slide show for those interested.
This was the field as we were driving from the road. 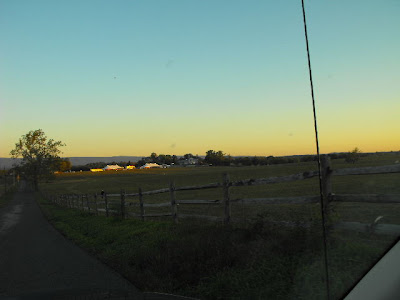 It was a lovely setting, with Belle Grove Plantation being the hostest with the mostest. 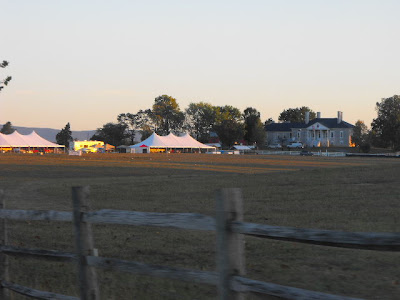 Camper's Village was full, I had my eyes out for a tornado, since you know trailers and tornadoes are made for each other. There was threats of rain, but nothing ever came. 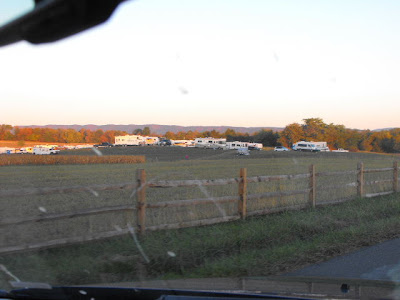 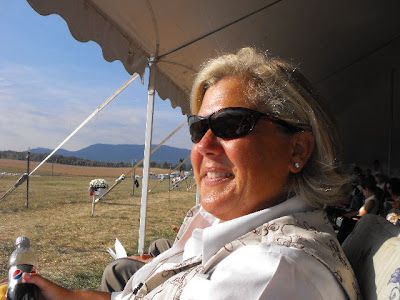 Corey Perry and Jill were the first to show us how it was done. Without his help, District 10 would not have whipped District 9's butt. 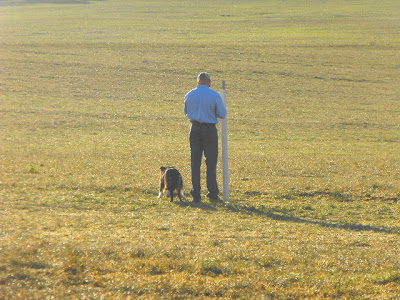 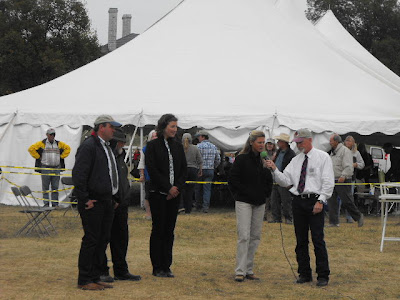 The flying of the colors were done during the semifinals and the double lift days. 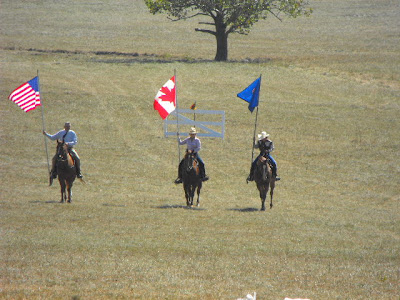 We had time to do some sight seeing. Crossing the other side, we took a District 9 person (Vikki Kidd) and spent the day with her. This was Jefferson's Rock at Harper's Ferry. Time has taken a toll on this rock, but the scenery is still amazing. 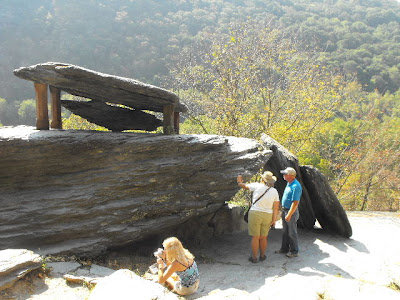 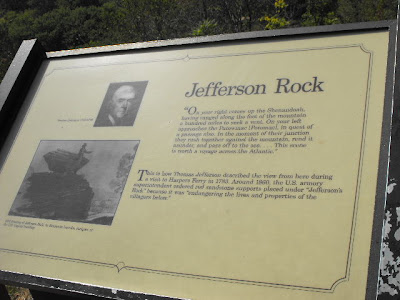 The view showed the Potomac and the Shanandoah Rivers merge. 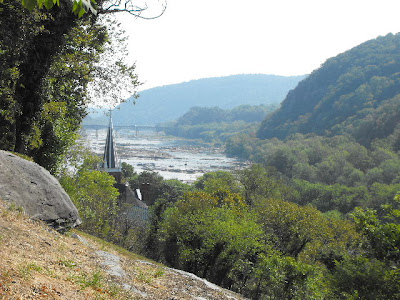 Harper's Ferry had several floods during it's history as a town. You can see on the edge of the building how high the waters reached. 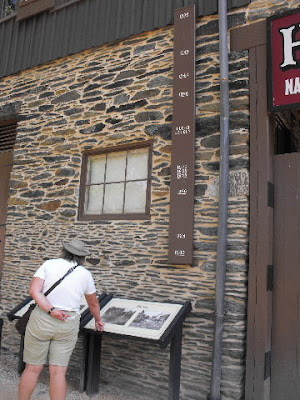 The river was low this season, and no fears of flooding existed. 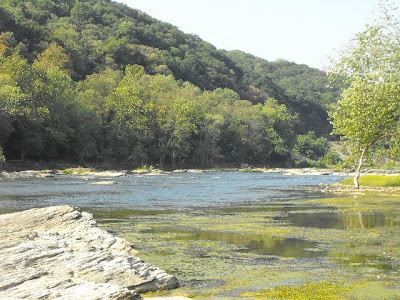 Many things were wiped out during those floods. 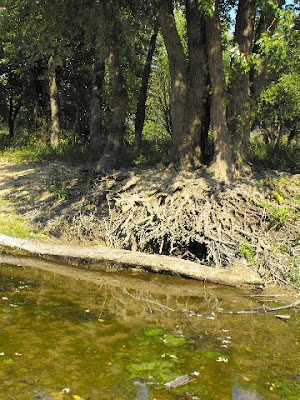 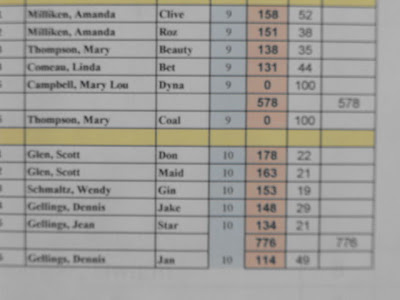 This was the amazing score they announced during the semifinals. 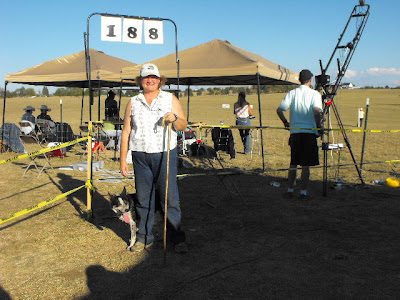 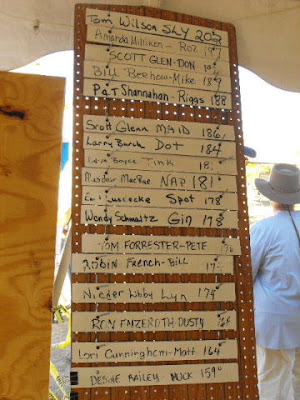 For celebration, Corey thought he would breed Jill to a Beardie which had run. Pups due late November. Call Corey for details. 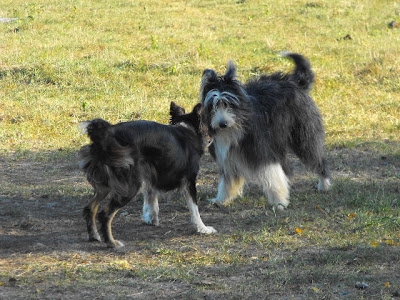 Gin and I doing the double lift, and our second international shed. 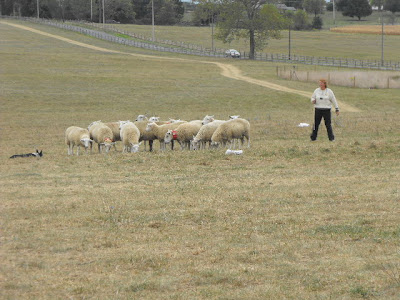 It may have not been the prettiest shed, but we got 'er done. 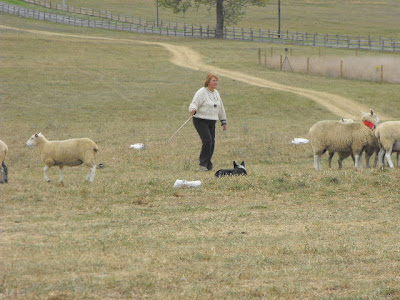 When I noticed 23 seconds left on the time, I decided to speed things up again, reliving the Calgary Stampede run this summer. 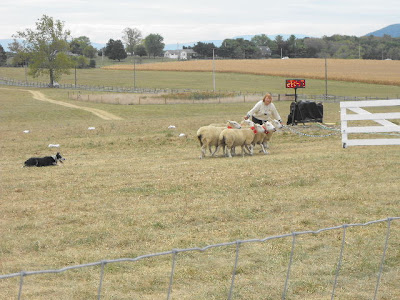 After having 2 seconds left on the clock, I maintained that I got my money's worth for our run. 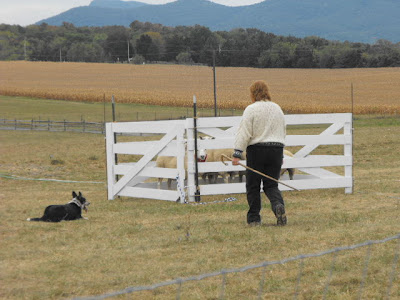 All Round Stockdog 2010 and fourth place for finals. 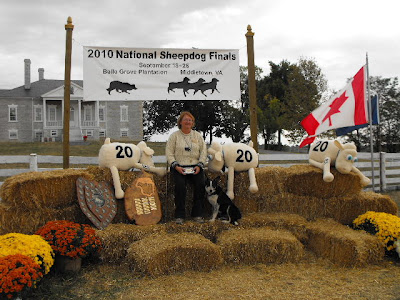 We visited Gettysburg before our trip back home, it was a rainy day, and you could just imagine the men on the fields fighting for what they believed in. 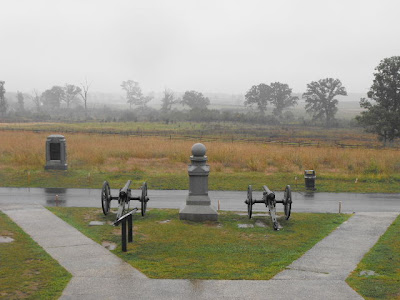 We barely made it back to the plane in time to get our dogs on the plane (mental note - it is 3 hours prior to take off for international flights, not 2).
Back home and back to the grind. A few weeks of work, and now the ASDA finals. I have only my young dog Creed and my younger dog Floss to run. Gin will be still in Virginia, with the hopes of a breeding to take place, which isn't likely going to happen. Fly had her pups (well really, pup) by caesarian, so she will be watching from the sidelines. For any wanting to watch some more trialing, come to the ASDA finals (directions on www.albertastockdog.com homepage).