After the Gellings trial (congratulations to Ken Price and Creed who did a great job), I have made my way across Alberta and have landed at the Sommer's residence to do some training. We took out the dogs today, Bev has a new female that looks like will suit her quite well, and pretty to boot! I brought out a 10 month old female (Luhoff breeding) that shows great promise - circling quite well and stops when asked - always a bonus in a young dog. There may be some dog dealing done in the next few days, and my trailer may become slightly lighter. Actually it is lighter at the moment - Fly took a flight to Kingston 1 week early to meet up with Amanda Milliken's Clive. Fly took flight at 5:30 this morning from Edmonton - and word has it that she has touched down happily in Amanda's (and Clive's) care.

I and Chris has decided to downsize abit on the border collies - people are starting to introduce me as Wendy Many Dogs - but there is no treaty card to go with that title. I am not doing a great job of it though - as soon as 1 dog is gone, I fill up the kennel again. I may have to go through a 12 step program if I am not careful.
Posted by Wendy at 7:58 PM No comments:

Am up at Gellings for a dog trial, and it is the first time I have been up this far north. The place for the field is great, and the sheep have been really good. I am pretty happy with my two days - Creed was second in nursery, I sent Syd out, and have realized I have a bit more work with him to do (crossing on his outrun), Fly still listens great for her age, and she only missed by 1 point for getting into the double lift that will be held tomorrow (damned pilot she has, all I needed was to get the second set of drive panels for 6 more points and the win of the day)- 82 points not bad I suppose. Gin worked well- once again it is the pilot at fault - maybe I should get new glasses.

The Gellings fed us very well, and then had a night of singing (and I would have been dancing, but I didn't drink that much). The days have been very nice, today was quite windy however. Oh, and then I had a flat tire, but luckily I was at Ken Price's place and he filled up my tire enough to get back to town to get it fixed. Alot of visiting and laughing - requirements for any good trial. Tomorrow is the double lift - 6 dogs - top three of each day will be going. Dennis and Jean Gellings, Carol Nelson, Ken Price, Bob Stephens and Jennifer Glen will be running their dogs. I will be setting, and will be taking pictures from the top. Perhaps I can get money for the pictures not to be posted on my blog - we will see. Bribery is not a bad thing - its only bad if it happens to you.
Posted by Wendy at 10:00 PM No comments:

July 13th, Calvin Jones has jumped on the plane and has headed back to Wales. I tell you, the 2 weeks that he stayed has been most enjoyable, but GOD am I tired. I used to be able to survive on less than 5 hours of sleep-of course, there was often beer and multiple people in the vicinity - oh that's another blog.
Trials, clinics, trials and more trials. My jeep really hasn't cooled down in the last few days - from all the running around was done. The Triple Crown Event was completed, and everyone seemed to enjoy themselves, as the dogs did. Here are a few pictures of the whirlwind week we had. 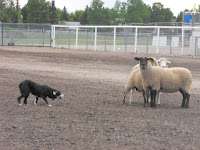 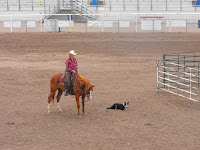 Gin and myself waiting for the cattle in Olds. Nobody got bucked off, nobody got hurt. 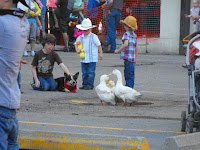 Gin did a duck demo during the Calgary Stampede Parade, which was also during the first day of the Hilltop Trial. My twins stepped in (Bev Sommer and Holly Brunner) and things got done while I was gone that morning. 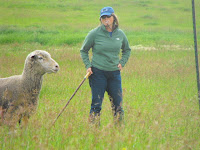 Lisa Wright showed her cool cucumber ways during her runs. Or possibly she was finding change to pay off the judge. 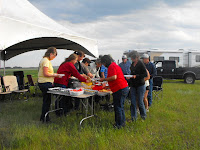 A potluck that night filled all the handler's bellies. 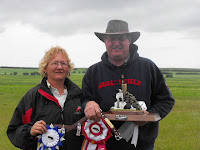 Donald Grant and Jeff was Champion Triple Crown Nursery Dog, Myself and Creed got Reserve Champion for this event. Have found out something about Donald - he pours very stiff drinks, and he doesn't hold his liquor very well. And he is very hiped up about putting on his own trial next year. 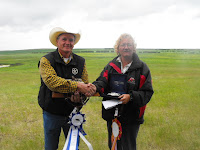 Jimmy Walker cleaned house (I wish he really did, my house looks like a pit stop). His Angie was Champion and his Mitch was Reserve Champion. He and Jan had a turkey dinner on the belt buckle he won.

Then when the Triple Crown was done with, we went to the Calgary Stampede. That meant waking up at 4 am to get ducks, dogs and Calvin ready. Everything was stuffed into the dog trailer, we apologized to Calvin, removed him from the dog trailer and continued on with our marathon.

The trial gods was with me, I got both Gin and Fly into the top 15 - the Bubble award went to Carl Sneddon and Gem.

Both of the girls penned - and there was a great lipstand done by myself with Gin's pen - hey, whatever works. Ulcers were created as I watched all of the rest of the handlers run. Pixie dust was thrown, and the final verdicts were in.

Dave Claypool was Champion with Glen, and Gin was Reserve Champion - Fly came in 5th.

My only job in the next few days is find an ATB machine with a large enough slot for the cheque.
A few more duck demos at Stampede will have to be done, and a trip to Lloydminster for a mounted dog trial is planned.
Now I know what a chicken feels like when she is running around with her head cut off.

June 29, 2010, Calvin Jones landed into Canada. He hails from Wales, and came over to judge the Trochu Dash for Cash Sheep Arena Trial, the Hilltop Mounted Cattle Trial, the Hilltop Sheep Field Trial, the World Stockdog Championships at the Calgary Stampede and also put on a clinic for handlers.
I don't think he knew what he was in for. 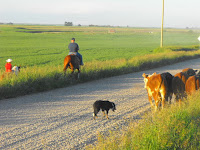 We found him a horse, and he helped us move cattle, not once, but twice. We had to treat some heifers, and then bring those heifers again to use them for the trial in Olds. He came all the way to Canada to do a cattle drive, and he still had to use an English saddle - we didn't have any Western Saddles with short enough legs. We could have put him in a kid's saddle, but Joey our 7 year old nephew was using his. I think he is half midget.
They say there is no rest for the wicked, so Calvin has been working steady. Long days and short nights is what his tourist brochure told him. After the Trochu and the Mounted Hilltop trials, we sheared some sheep on our day of rest, and also made him become a mechanic and take tires off of our Gator for the Hilltop Field Trial. He also provided maid services - one night after coming home (not sure what night it was, it is all rolling into one now), we came home to find the basement flooded, and we spent 2 hours mopping up and drying his belongings. That was supposed to be our night to go to bed early. Yeh, right. His restful time came the last few days when he helped handlers at a clinic. 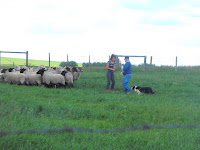 We had people from all walks of life - those new people wanting to get into dog trialing and starting their young dogs, to ranchers who want to make their dogs more useful, and to open handlers needing to polish their dogs up. 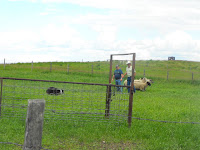 Even the dogs at the clinic watched closely during workouts. 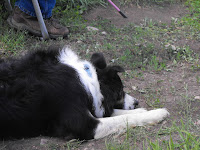 The rest of the people at the clinic learned from others as well and they watched, and Calvin explained what he would do to improve each dog. Everyone enjoyed the two days, and everyone learned great information. 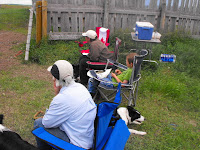 I am not sure he will want to come over to Canada again. He may be the first judge killed in the line of duty. 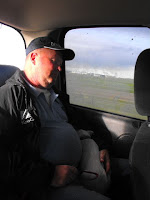